The Power of a Great Teacher 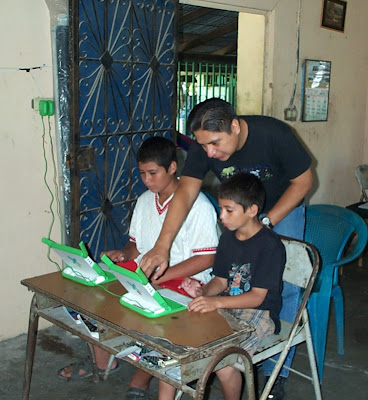 Next April will mark two years since Proyecto Juan Chacon's 27 XOs first arrived in El Salvador. We learned a very important lesson in the first year that they were in La Cooperativa Juan Chacon: a successful XO / Sugar educational project requires a great teacher. Progress was slow going during the first year. The XOs sat unused far more often then not, since the community really didn't know what to do with them.

That all changed about six months ago when the following occurred:
Erick is an excellent teacher, and the community project in Chaletanango, El Salvador in moving forward at a wonderful pace, as the young student in this video can attest:

There are some in the Sugar community who believe that putting XOs in the hands of young folks is enough for them to begin learning on their own. Our experience in Los Chilamates suggests that while Sugar is an excellent learning tool, it requires a great teacher to make it come alive.
Posted by jelkner at 2:43 PM No comments: 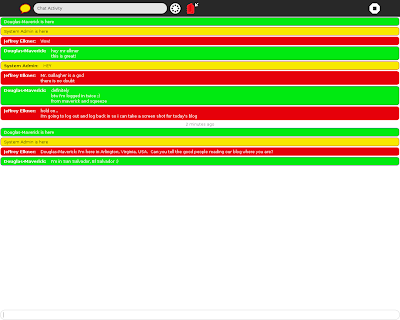 Matt Gallagher is on a roll!  At 2 pm today (EST) he and Douglas used the Chat activity on Ubuntu Sugar Remix (USR) to communicate between Arlington, Virginia, USA and San Salvador, El Salvador.  This required Matt to patch ejabberd to support Sugar's requirements, which in turn required him to learn enough Erlang to accomplish that.
Wonderful work, Mr. Gallagher!
Posted by jelkner at 4:01 PM No comments: 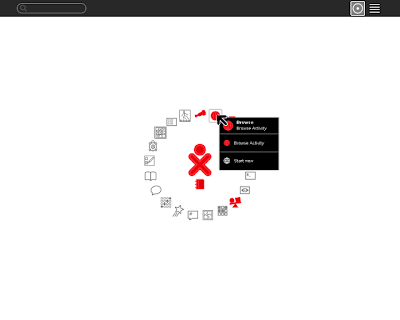 Ubuntu Sugar Remix (USR) took a big step closer today to becoming a classroom ready computer learning environment thanks to the fine work of Matt Gallagher.  The USR that installs from the current Ubuntu 10.10 repositories lacks a usable web browser - a flaw which renders it not ready for classroom use.  Thanks to Matt, the full featured browse activity is now packaged and ready for installation from his Personal Package Archive (PPA).

Canonical makes community developed projects like this dead simple to use.  Matt wanted me to warn anyone reading this that these packages are unsupported and should only be used by folks whose primary interest is using Sugar on Ubuntu, since there may be issues doing a distribution upgrade to Ubuntu 11.04 with them installed that could possibly break your system.

If your still interested after that warning, here is how I will be installing USR on Ubuntu 10.10 machines from now on:

From a command prompt, run:

This adds Matt's PPA to your apt repository list.  After that, run:

You now have a working USR environment complete with a working browse activity.

If you already have USR installed, you will be able to remove the broken firefox activity after adding Matt's repository and updating your packages.

Tomorrow Matt will be tackling getting our jabber server to work, after which we can realize our big goal for this year by testing Sugar collaboration between Arlington, Virginia and Los Chilamates, El Salvador...

Thanks Matt!
Posted by jelkner at 8:42 PM No comments:

A SchoolTool Gradebook for Educational Reform?

With prospects for the eventual creation of the Governor's Career and Technical Academy in Arlington now looking a bit more promising, I recently asked to join the grading committee at our school. We are reading a book by Ken O'Connor called A Repair Kit for Grading: 15 Fixes for Broken Grades. My personal experience of 20 years as a teacher and at least twice that as a student has me totally convinced that the way grades are used in our schools represent student learning of our published content standards and learning outcomes either very little or not at all (O'Connor, 2007, p. 3).

Among the 15 "Fixes" O'Connor lists in the book, 3 in particular stand out as things I would like to incorporate immediately into my own classroom practice.   Fix 8: Don't assign grades using inappropriate or unclear performance standards (O'Connor, 2007, p. 61), Fix 11: Don't rely only on the mean (O'Connor, 2007, p. 81), and Fix 12: Don't include zeros in grade determination when evidence is missing or as punishment (O'Connor, 2007, p. 85).  I'm well aware of the problem of the zero. Using a 100 point scale and 4 equally "weighted" assignments a student earning 100, 100, 0, and 100 would have a 75 or "C average".  I'm interested in exploring the more meaningful score systems suggested in the book (O'Connor, 2007, p. 88), but to do this effectively will require an electronic gradebook which supports this.

The good news is that the gradebook I am currently using, the SchoolTool gradebook, has the promise of being able to make the student data it holds more useful in the the service of learning.  There are three components of SchoolTool that together offer the potential to take communication about standards and performance among students, teachers, parents, school administrators and support personal, and other stake holders in the educational process to a whole new level.

SchoolTool has three components that I am using this year to help students learn better: the CanDo competency tracker, the gradebook, and the intervention system.  In future posts I'll describe each of these in more detail, but for now I want to mention one essential feature missing from the gradebook that could potentially make SchoolTool a tool of choice for educational reform efforts involving grading.

The gradebook has nicely designed worksheets that hold collections of activities that are individually scored.  I'm convinced these worksheets could be further developed into an amazingly flexible tool for more effective grading if:
By flexibly producing a "grade" I mean having support for more than just the customary calculation of the mean of a set of scores.  O'Connor emphasizes that grades are broken when the procedures used to arrive at them are faulty, and that simply using the mean score as a measure of student achievement is often times faulty (O'Connor, 2007, p. 81).

I can image being able to create worksheets that are labeled according to learning outcome, and are scored using a system that better reflects what students can do at the time the "grade" is determined.  This may mean counting later evaluations more than earlier ones or using a mode score of multiple evaluations to arrive at a "competency score".

Because SchoolTool is free software and is open to direct input from users within the SchoolTool community, it offers the possibility of being our evaluation tool in support of educational reform.