SugarLabs DC Is Back!

SugarLabs, DC has a new project.  Khady Lusby, founder and president of OPEN International, a non-profit she created to help build first a library, and now a growing school in her native Senegal.

I've had the great pleasure to work with Khady for a few years now, ever since she brought me several donated laptops for the library she was creating and (at the suggestion of the donor, I might add) wanted me to install Ubuntu on them.

The library has now grown into a six room school, and the same donor has come back with 30 additional laptops that Khady wants to use to start a program for elementary students.

Thinking about her requirements, to best meet her needs we need:
It would also be a plus if the systems could dual load an adult desktop as well.

After monkeying around with Fedora 17 for several days, trying the stock install as well as the XFCE and LXDE spins, I decided I would be much more comfortable with an Ubuntu variant for the following reasons:
Even with these arguments in favor of using Ubuntu, there were serious obstacles as well:

I tried Ubuntu initially, but gave up after the sugar installs from the stock debian repositories crashed repeatedly.

A trip to the irc channel #sugar and help from the ever helpful alsroot came to the rescue.  He pointed me to the Sweets Distribution and said it would work on Ubuntu 12.04.  It did work!  Here is what I did in a terminal:

This adds the sweets repository to your /etc/apt/sources.list.d/ directory. From there you can install the sweets-desktop meta package and you are good to go.   Here is a screen shop of a VirtualBox setup as a test for the laptop installs: 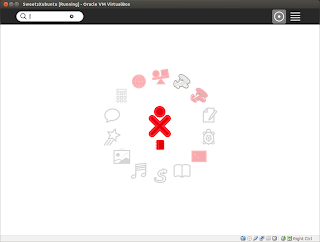 Thank you again, Mr. Lim, for all your help!  I'll post again soon with an update of how things go from here...
Posted by jelkner at 11:43 AM 2 comments: