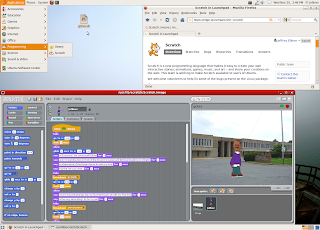 The screenshot above shows Scratch running natively on Ubuntu Karmic.  There is a Scratch in Launchpad web page that greatly simplifies the installation process, at least for someone generally familiar with basic Debian system administration.

I've been running the Windows version of Scratch using wine for the past year, and using the new version has several important advantages:

This is fantastic news for educators using Ubuntu!  While I understand that there are still software freedom issues to be worked out with the Scratch developers, Scratch is compellingly excellent software (the best educational software I have ever seen), and having it available on Ubuntu means that I can stay with the operating system I love best and use the software I need to use for the benefit of my students.  It also opens up the possibility of Ubuntu Live USB sticks with Scratch pre-installed.

In related news, Sugar now works on Ubuntu Karmic as well.  The Sugar Team on Launchpad provides a Personal Package Archive (ppa) with the latest (version 0.86) sugar.  This is great news for us at the Governor's Career and Technical Academy in Arlington (GCTAA), where we plan to make contributing to Sugar a central part of our Information and Communications Technology program, and needed to be able to do that on Ubuntu.

I've been using Launchpad since soon after it was first available on-line.  Ever since hearing Mark Shuttleworth talk about his vision for it back at the Ubuntu Down Under developer conference, I understood that Launchpad is a core part of bringing developers and users together to make Ubuntu better.

Thank you Ubuntu community!
Posted by jelkner at 4:13 PM 1 comment: 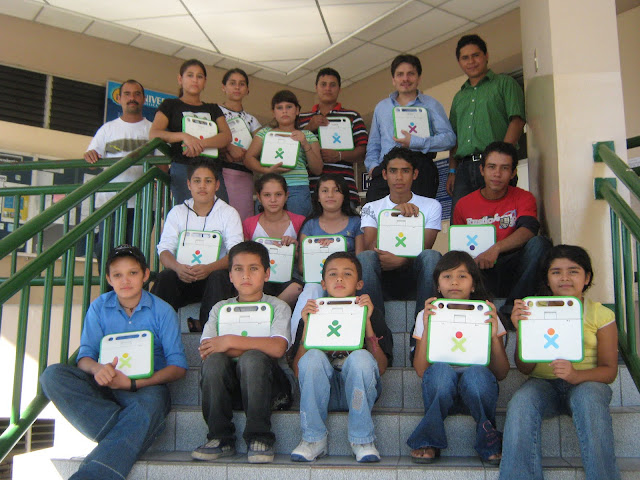 The picture above shows the students from Los Chilamates who have been attending Saturday XO classes at la Universidad Evangelica de El Salvador.

Classes have been proceeding well, and I'll report back with more details as soon as I have them.  My son, Louis, will be heading to El Salvador on December 17 to help with the project.  I'll be sending detailed reports back from Chalatenango during his visit.

Louis's goals for the project during his visit include:

In related news, there is now a PPA (personal package archive) with the latest Scratch available on Launchpad.  The project is located here.  It works like a charm!  I've been using wine to run the windows version, but midi functions like playing notes and instruments never worked this way.  Now it does, and having a native version makes saving and finding projects a lot easier as well.

Since I will also need Scratch running on the Fedora 12 machines we have in the lab for Sugar development, I needed an rpm.  Sabastian Dzaillas, maintainer of the Fedora EDU spin, suggested I try using alien.  I did, and it worked!

Email me if you want a copy of the rpm.  I want to find a place to post it, but I'm still not sure about the licensing issues.  It works, but it still needs a bit of love to get rid of the errors that are reported during installation.
Posted by jelkner at 12:26 PM No comments: