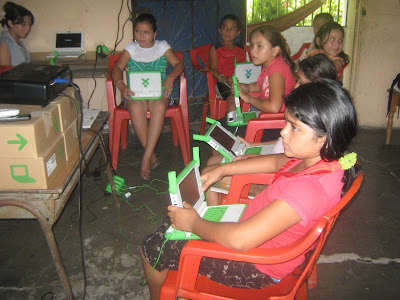 We just finished our first class in Chalate. Ten of the eleven students had never used a computer before, the first class was spent getting them instroduced the new machine. They are young, they learn fast, and Sugar (or Azucar as we call it in Spanish) makes computers easy to love.

Last Friday I was talking with one of the community elders who told me he didn't like computers. A few minutes later one of the kids showed him an XO running Azucar. "Oh, I like this", he said with a smile.

Since none of the kids can type, I plan to take a look at the typing activities available to see what they can do. I'll report back later. The "Hablar" (Talk) activity was a big hit, and several eyes lit up when we looked up "vaca" (cow) on Wikipedia using the Browse activity.

Oh, a summary of the working condition of the 30 laptops sent for this project is as follows:
5 of the batteries were bad. I combined 3 of these with the defective computers, leaving 2 working computers that will need to be plugged in to function.
Posted by jelkner at 2:40 PM